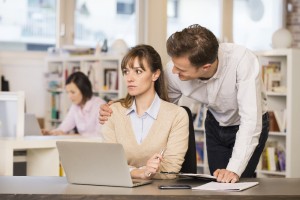 The New Jersey Law Against Discrimination protects employees from sexual harassment in the workplace. Sexual harassment consists of unwanted comments or actions directed against an employee because of his or her sex. Sexual harassment can be of the quid pro quo type or the more common hostile working environment claim. In a quid pro quo claim, the employee's terms and conditions of employment are made conditioned upon accepting the sexual advances. A hostile working environment claim rises where the sexual comments or actions are severe and/or pervasive. Even one act of sexual harassment can be severe enough to support a claim. Harassment that occurs repeatedly and/or frequently can satisfy the pervasive requirement and you can contact one of sexual harassment lawyers in NJ at the offices of Alan H. Schorr & Associates.

Watch our short video on the subject below. Contact us if you have any questions.