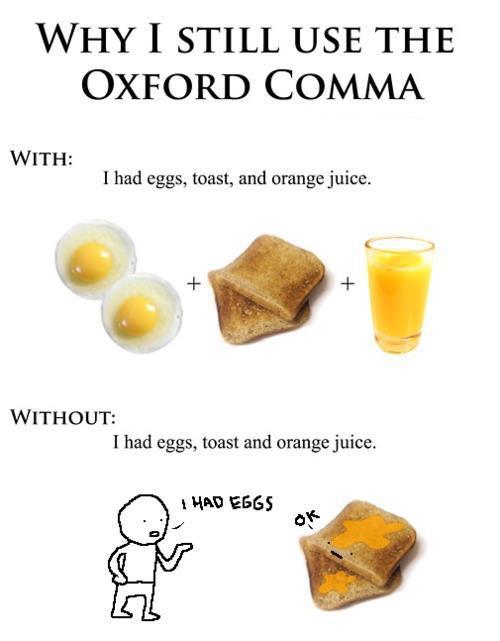 I have long been a staunch supporter of the Oxford comma and believe that it should always be used. After the First Circuit decision in O'Connor v. Oakhurst Dairy, I get the distinct feeling that employers will start to agree with me on this.

What is the Oxford comma (lesser known as the serial comma)? Quite simply, it is the comma between the second to last item in a list and the last item of the list. In the sentence "I write letters, briefs, and case of the week articles", it is the comma after briefs. In journalism, it is common to omit this comma, and in other fields, its use is mixed.

O'Connor and other employees brought suit against Oakhurst Dairy claiming they were not paid overtime benefits they were entitled to. In question was an exemption clause in the statute, stating that "[t]he canning, processing, preserving, freezing, drying, marketing, storing, packing for shipment or distribution of" various food items were not covered. Specifically, the Plaintiffs contended that "packing for" referred to both shipment and distribution, while the Defendants contended that "packing for shipment" and "distribution" were two separate items. The Plaintiffs distributed the food items, so the case turned on whether the exemption was for "packing for distribution" or for "distribution" itself was the crux of the case.

The District Court ruled in favor of the Defendants, finding that their interpretation of the statute was better than the Plaintiffs' interpretation. The First Circuit acknowledged that there was but one non-binding decision on the matter and set out to interpret it themselves. If you are a grammar nerd, I highly suggest reading the full opinion, as this is a difficult one to summarize down to a few lines.

In essence, the First Circuit first examines the Defendants' arguments, noting that Maine's statute construction manual indicates that the comma should be omitted and that interpreting the "or" any other way would leave the list without a conjunction. Then, they examine the Plaintiffs' arguments, noting that the manual has exceptions and that statutory language sometimes omits conjunction. They note that the legislative history provides no helpful guidance. Given this, the First Circuit than does what most people would do: throw up their hands and say "we have no idea".

In the end, Maine had a default rule of "tie goes to the people the law was intended to help", or, legally speaking, given ambiguous language, the wage and hour law should be interpreted to provide the most help to employees. The First Circuit therefore adopted the Plaintiffs' interpretation and reversed the District Court. I agree with both Courts - I think the Defendants' interpretation is the better of the two, but it is ambiguous, and ambiguity should be interpreted in accordance with the law.

The moral of this story: always use the Oxford comma. Especially if you're a lawyer or lawmaker. There is no reason not to, and as this case shows, every reason to do so.