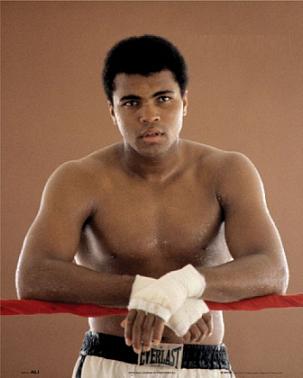 This is the sad story of Mohamed Ali - not Muhammed Ali, who was, IMHO, the greatest of all time and my personal hero.  Poor Mohamed proved his case of sexual harassment in a New Jersey Court and ended up with a $1,000 verdict, and he may not even collect that paltry amount.  So despite being right and proving his case, poor Mohamed is down for the 10 count.  I went to the Appellate Division to get all the briefs and appendices, and I want to take this opportunity to point out 10 things that Mohamed did wrong that led to this TKO.

Mistake #1 - Failure to document complaints. Mohamed did not document his complaints of discrimination.  In his case it was not easy to do so since he was working for a one owner restaurant without an HR department.  The harrasser, who repeatedly grabbed his backside and made Arabic epithets about his mother’s private parts, was his boss and direct supervisor.  Nevertheless, the employee needs to complain about such abuse, and should do so either by e-mail or by recorded conversation (perfectly legal in NJ and easy to do on a smart phone).

Mistake #2 - Mohamed quit his job.  Rule number 1 for harassed employees - DO NOT QUIT!  There is always a better option.  When we consult with people like Mohamed we discuss options such as writing a demand letter to try to negotiate a fair severance.  If the harassment is causing true emotional distress, temporary disability is sometimes a good option while a settlement is negotiated.  When an employee quits, it removes all leverage, lessens damages, and may even disqualify the employee from unemployment.

Mistake #3 - Mohamed did not retain a lawyer.  An employment attorney knows exactly what to do with a case like this.  Mohamed was very angry and very principled, but I have read his papers and, well, Mohamed is not a very good lawyer.  Representing yourself is the most dangerous mistake an injured employee can make.

Mistake #4 - Mohamed decided to file with the New Jersey Division on Civil Rights (DCR).  This State agency does not do an adequate job of properly investigating claims.  They are underfunded and understaffed. Furthermore, the statute of limitations can run out while they are investigating.  Critically, the law requires the DCR to make a finding.  A finding of “no probable cause” is a determination that can only be appealed to the Superior Court, Appellate Division.

Mistake #5 - Mohamed went to Office of Administrative Law (OAL).  New Jersey law provides that, if the DCR has not rendered a decision within 180 days, the employee has the right to transfer the matter to the Office of Administrative Law for a contested hearing.  If Mohammed had permitted the DCR to complete the investigation and proved probable cause, the attorney general would have represented him at the OAL.  Because Mohamed withdrew early, he was denied a government attorney and had to represent himself.

Mistake #7 - Mohamed did not know how to try a case.  He won a verdict only because the employer (who could not afford an attorney) did not even show up.  Mohamed did a very poor job of explaining his emotional distress and without a bad guy to cross-examine, his presentation completely lacked emotional appeal.

Mistake #8 - Mohamed sued a broke company.  The Court would not permit Mohamed’s employer to self-represent because it was an LLC.  The individual defendant did not show up.  Neither could afford an attorney.  No doubt the inability to pay factored into the OAL judge’s decision to award $1,000 to Mohamed and a fine of $1,000 against the employer.  Mohamed will now have to try to collect that $1,000 from an entity that may very well be judgment proof.

Mistake #9 - Mohamed severely overreached.  One of the biggest mistakes that employees make is overestimating the value of a case.  An experienced attorney can help an employee put a proper value on a case and having a rational expectation is critically important in litigation.  After the verdict, Mohamed filed his list of exceptions, as permitted, with the Division on Civil Rights.  If Mohamed had argued that he should have been award $5,000 or $10,000, the DCR might well have increased his award.  But Mohamed demanded $2 million, which was a completely ridiculous and indefensible overreach.  Given Mohamed’s absurd demand, the DCR affirmed the award.

Mistake #10 - Pro se appeal.  The Superior Court Appellate Division is a complicated place.  Writing a proper brief requires experience and skill that untrained citizens simply do not have.  He did not cite verdicts from other cases or cite precedent as an experienced employment attorney would do.  He did not request oral argument.  On the other side, the DCR was represented by the Attorney General, who now took sides against Mohamed.  So Mohamed trusted the DCR to pursue his claim and instead they litigated against him.  It was a mismatch, and Mohamed lost his appeal.

And that is how you win a match and end up down for the count.